Here is a side view of the MK3 Amphibike shortly after completion. This picture was taken on the day of its first dual-medium ride. The steering is back up front, and the drive is in the rear. Like the MK2, its drive wheels are retractable in the water, but the design is much stronger due to more simplicity, more appropriate frame materials, and the inboard-of-pontoons drive wheels. The same seat, gearbox, and propeller gearbox from the MKII are installed, along with the front wheel (with cowl to improve ruddering in the water) and the rear wheels (re-laced with Odyssey BMX hubs) Also, the MK3 actually has a front derailleur (I had to shift the chain with my fingers on the previous ones) and it has low-range-biased 30 forward speeds instead of 6 too-high speeds on the previous two. 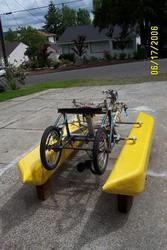 Here is a picture of the MK3 with its drive wheels retracted. (it is supported by blocks.) The wheel retraction linkage is set up so that when the wheels go up, the propeller goes down at the same time, eliminating the need for a second linkage to move the propeller up and down. The retraction process is simple. Ride into the water. As soon as I start floating, the wheels drop slightly, releasing the support arm. I can then lift the upper arm up, where it stays put via friction. Then I can pull a lever which lifts the whole rear assembly (made from two identical bike frame rear triangles, pivoting on their bottom brackets) up into the retracted position. The lever can then be locked from up front, holding the wheels there. I can accomplish all of that without getting off of the bike. As with the MK2, there is no need for chain tensioners due to the concentric pivot and idlers. Both drive wheels have their drive chains inboard of the wheel, which means that one is right-side drive and the other is left-side drive. I used two Odyssey BMX hubs (available in both drive styles for trick BMX riders) to accomplish this. 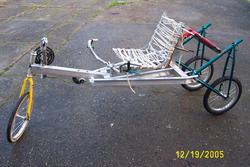 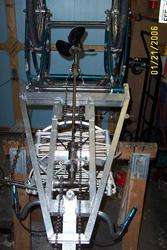 Here are a couple pics of the MK3 in various stages of completion. The first is probably the first picture I took, when the basic frame was done but very little of the drivetrain and retraction mechanism had been sorted out. Still, even at this point I knew that this frame was much stronger than the MKII frame had been. I can jump up and down on top of this one, I was too afraid of the other one (even before it broke) to try that. Should have listened to my gut I Guess.

The second picture is a close-up of the rear section of the drivetrain after it was basically complete. You can see a good clear shot of the re-used propeller gearbox, and the rear Sturmey Archer 3-speed hub (modified to make 3rd a neutral, to disengage the wheels when in the water) You can also see the center-pull brakes on the rear wheel assembly. You can't see the intermediate idler/derailleur or the crank set. The most interesting part about the front drivetrain is that the derailleur for the intermediate idler has had all its springs reversed, so that I could turn around the derailleur 180 degrees and bolt it to the frame, inboard of the cogset, instead of attaching it outside of the cogset like on a normal bike frame. Converting that derailleur was a pain. 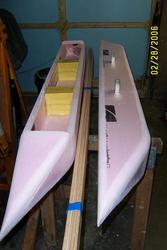 Like the fiberglass pontoons I used on the MK1 and MK2, the pontoons for the MK3 are a laminate laid over a styrofoam core. Unlike the MK1/MK2 pontoons though, the new ones for the MK3 do not have an intergal aluminum backbone (instead, just two aluminum mounting struts). The strength of the completed laminate assembly is enough. Also, I used kevlar instead of fiberglass so that I could use fewer layers of laminate (one on top and sides, two on the bottom, except for the leading and trailing edges which have 3+). Finally, I did not laminate the insides of the pontoons, except for the blocking that supports the mounting struts. The result: The new pontoons weigh less than 12 pounds each, versus about 25 pounds each for the originals. And while weighing less, the new pontoons displace more water with less surface area, and have more heavily radiused corners, and fewer planes than the originals, making them (hopefully) more hydrodynamic.