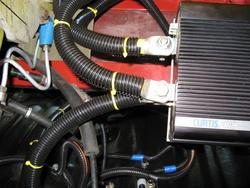 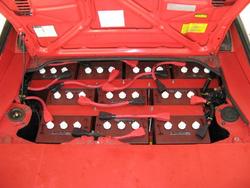 The major components of the traction circuit are the batteries, motor, and controller. The batteries store energy, the motor converts electrical power into mechanical power, and the controller modulates power to the motor.

The circuit must contain several components to allow control and provide safety features. 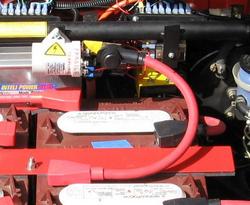 This is basically the big on/off switch for the motor and controller. It should be wired to open up under zero throttle (not just when the ignition is off) This way, if for some reason (it is known to happen) the controller shorts out, you can still cut power by letting off the throttle completely. Mine is a Tyco Electronics 250A rated contactor, but it will break 2000A if it needs to (but should probably be replaced if it actually does do this). Under normal circumstances, it will switch under no load so the contacts should last a long time. 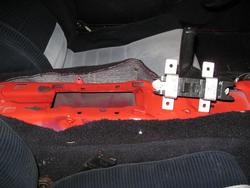 Hole cut, brackets made for breaker. 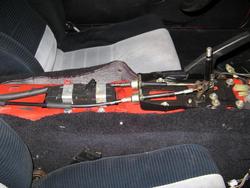 Breaker in place and shifter linking installed around it. 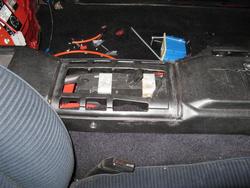 Interior console (with section cut away to allow breaker access) back in place. Missing trim piece will be fabricated later.

Another safety power cutoff. My Heinemann 250A DC circuit breaker is reachable by the driver and passenger. It allows you to cut power in the event of a runaway controller, or a stuck throttle, or whatever. I also turn it off when the car is parked. It will pop automatically if current exceeds its rating for too long. It will go minutes at 300A to 400A, but will open within seconds once the current goes into the 1000s of amps, such as what would happen in a short circuit situation. It is also useful for cutting off the battery when working on the car. Electrically, mine is located between the most positive battery and the positive terminal of the controller, which means that openning it cuts power to the motor and controller but doesn't cut power to the DC-to-DC converter, heater, or disconnect the charger. A regular 20A fuse does that job on my car. 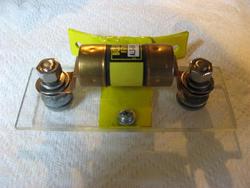 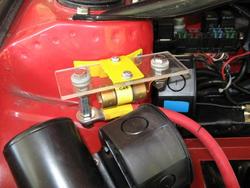 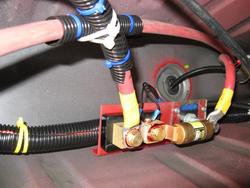 fuse (and ammeter shunt) in tunnel area. Undoubtedly the one to blow first.

There should be several fuses in series with the battery pack. Mine came from Discount Fuse's Ebay store. These will blow if for some reason the circuit breaker does not, or if somebody drops a tool and shorts out only a portion of the battery pack. They should be as evenly distributed between the individual batteries as possible. In my case, I have three fuses, and there are no more than 5 batteries (30v) in series between any pair of fuses. The circuit breaker divides the most positive and least positive set of batteries. My fuses are rated for 500A (probably should be 600, as the controller itself is rated for 500) but so far I have been unable to pull more than 400A for more than a second or two anyway, so it will probably be fine. 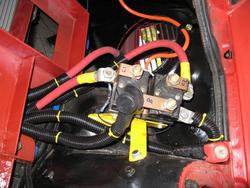 My car is somewhat unique in that it has an electronic reverse. The Albright reversing contactor is basically a huge DPDT switch, wired to control the polarity of the field winding of the motor relative to the armature. It does this by energizing one of the two coils on the contactor to close the proper contact to make normal polarity. Energizing it the opposite way will reverse the polarity of the field winding. Having this contactor adds another safety dimension: I wired it such that it will cut off the motor from the controller when the ignition is turned off. Therefore, even if both my main contactor shorts, and my controller shorts, shutting off the ignition will still open this contactor, shutting off the juice. Note that it is also possible to wire it such that while it still works under normal circumstances, cutting off power to its coils will short out the output of the controller instead of opening it up. The motor would stop running, but it would still burn something up. The correct way to wire it is to have the common side of the DPDT switch on the field winding of the motor. See the EV Wiring Schematics page. 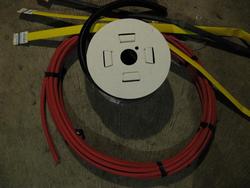 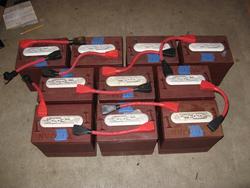 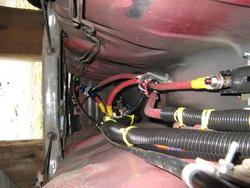 Battery cables in the tunnel section under the car. Breaker and Ammeter shunt visible.

Battery and motor cabling must be heavy wire to handle the current loads of several hundred amps. It must have robust insulation to resist wear, rubbing, and other abuse. It should be flexible. Welding cable (available in bulk from welding and industrial supply outfits) is ideal for this purpose. For my car (and any non-drag-racer EV) 2/0 sized cable is fine, and that is what I used. I used red cabling, but I really wanted UL orange, as EMT and other first responders are trained to recognize orange wiring as dangerous. Red was the closest I could get.

The cabling needs to have connecters installed. I used regular automotive style terminals for the battery connections, and lug type terminals for everything else. The lug type terminals are intended to go over a post or be held down by a bolt. I used a hammer type crimping tool to attach the connectors to the wire, and some large heat shrink tubing to help seal the connection. I also used copious amounts of anti-corrosive compound on the crimped connections.

In some of the more exposed areas of the car, or where the battery or motor cabling would run close to other things or make contact, I added one (or in a couple cases) two layers of corrugated plastic cable sheathing as an extra layer of armor for the cabling. Anywhere a cable went through a metal bulkhead, I made sure there was a rubber grommet lining the hole.

Often overlooked or ignored on a lot of cars I have seen is a good effort to insulate the battery cables. Battery cables and any other high-current cables (especially those easily reached) should be as fully inslated as possible. You can buy rubber boots that fully cover terminals of a battery after the cable is hooked up. This way, as long as all the rubber boots are in place there is no exposed metal to be shorted out by a dropped tool, etc. Also it reduces dirt and corrosion buildup. I admit I did not put rubber boots on most of my motor and controller cables as they are located under the car where it is impossible to drop something on them, and because they don't have any voltage on them except when the car is running.

This circuit can provide enough power to cause serious damage, and serious injury, so it must be treated with respect. Therefore, I took several precautions when powering it up for the first time.